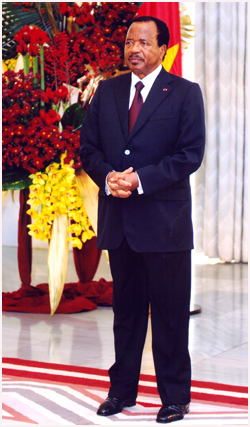 His itinerary is, first and foremost, that of a young man who was born during the colonial era and destined to become a clergy man. He is thus a humanist with different academic backgrounds: he obtained his First School Leaving Certificate in 1948 in Catholic School Ndem, the Tharcissius Pre-Seminary in Edea (1948-1950), the Minor Seminary Akono and Lycée Général Leclerc, where he obtained his Baccalauréat Certificate (equivalent of the Advanced Level) in Philosophy in June 1956.

His stay as a student in Paris, France gave him the opportunity to discover Western philosophy and to read some authors who still continue to guide his way of thinking. At Lycée Louis-le-Grand in Paris as well as in the Institute of Political Studies in Paris or in the Institut de Hautes Etudes d’outre-Mer, he remained steadfast to the convictions he held as an adolescent. He believed in man; in man’s capacity to surpass himself and in man’s natural quest for liberty. He has an essentially legal academic background: a Bachelor’s Degree in Public Law (1960), a Diploma from the Institute of Political Studies(1961), a Diploma from the Institut de Hautes Etudes d’Autre-Mer (1962), a Diploma of Higher learning in Public Law (1963). The few young African senior staff that had such an academic profile in the 1950s naturally ended up in senior administrative positions. Paul Biya would not have been an exception to this rule.

In 1968, Paul Biya joined the Government as Minister, Secretary General at the Presidency of the Republic. In June 1972, he was promoted as Minister of State, Secretary General at the Presidency of the Republic. He held this position for five years and was appointed Prime Minister on June 30, 1975. He became the constitutional successor of the Head of Sate in July 1979 and President of the Republic, two days after Ahmadou Ahidjo resigned, on November 6, 1982 by virtue of the constitutional amendment in accordance with law No 79/02 of 29 June 1979.

Paul Biya has been married to Chantal Biya since April 23, 1994 following the death of his first wife. He is a father of three: Franck Biya, Paul Biya Junior and Anastasie Brenda Biya EYENGA.

As a great sportsman Paul Biya enjoys cycling, jogging or walking in his leisure time. The President of the Republic has been decorated severally.

-  Grand Master of National Orders (The Republic of Cameroon);
-  Grand-Cross of the Legion of Honour (The French Republic);
-  Great Commander of the Medal of St- George (The United Kingdom of Great Britain and Northern Ireland) ;
-  Grand-Cross of exceptional class (Federal Republic of Germany) ;
-  Grand Collier of the Order of Ouissam Mohammadi (The Kingdom of Morocco) ;
-  Great Commander of the Order of Nigeria (Federal Republic of Nigeria) ;
-  Grand-Cross of the National Order of Merit (Republic of Senegal) ;
-  Commander of the  Tunisian National Order;
-  Doctor Honoris Causa of the University of Maryland (USA) ;
-  Honorary Professor of the University of Beijing (The People's Republic of China);
-  Peace laureate of CEPS (1988 edition);
-  November 6, 1982 : His Excellency Paul BIYA became President of the Republic by virtue of the constitutional structure following the resignation of Mr. Ahmadou Ahidjo ;
-  January 14, 1984 : His Excellency Paul BIYA was elected  President of the Republic ;
-  Member of the Political Bureau and of the Central Committee of the Cameroon National Union (CNU) since the 2nd ordinary congress of the Party in February 1975 in Douala and Vice-President of the Central committee of the CNU after the Bafoussam Congress in February 1980;
-  He was elected President of the Cameroon National Union (CNU) during the 2ndextraordinary congress of the party, which held in Yaoundé on September 14, 1983;
-  He was triumphantly elected president of the Cameroon People’s Democratic Movement (CPDM) following the 4th Ordinary Congress of the Cameroon National Union,  which held from March 21 to 25, 1985 in Bamenda. This Congress witnessed the transformation of the party and its change of name;
-  April 24, 1988: he was re-elected President of the Republic;
-  October 12, 1992: he was once more at the helm of the State following the first multi party presidential elections;
- October 12, 1997: he was again elected Head of State and began his first seven-year mandate;
-  October 11, 2004 : His Excellency Paul BIYA was re-elected President of the Republic.