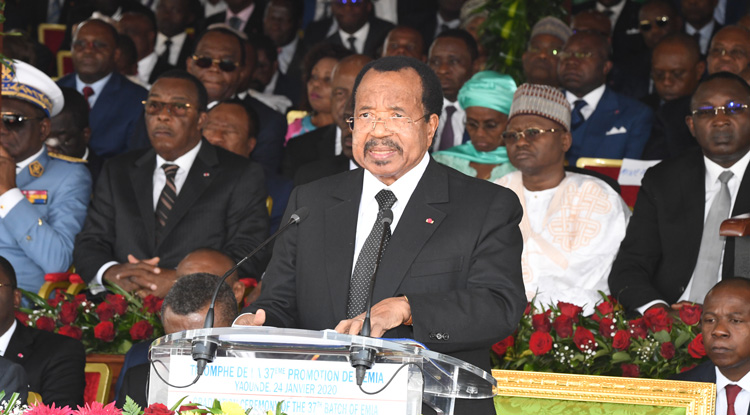 SPEECH BY HIS EXCELLENCY PAUL BIYA, PRESIDENT OF THE REPUBLIC,
COMMANDER-IN-CHIEF OF THE ARMED FORCES

In recent years, the security of our country has been put to severe test. Three of our regions in particular have been or are affected by insecurity.

In the Far-North, sporadic raids by the Boko Haram terrorist organization continue to wreak death and desolation among our citizens.

On our border in the East Region, various atrocities are being perpetrated by highway robbers.

In the North-West and South-West, secessionists, who have morphed into numerous armed gangs, continue to commit atrocities and to destroy the property of some of our fellow citizens whose sole aspiration is to live in peace.

Yet, multiple and urgent appeals for peace have been made. Several measures have been taken to persuade those who have risen against their fatherland to lay down their weapons and return to the path of reason through their peaceful reintegration into society.

Unfortunately, a few groups continue to fuel insecurity in some places in the two regions.

However, thanks to the determination of our defence and security forces to protect our fellow citizens in the North-West and South-West, the situation has significantly improved. It is hoped that the new measures taken following the Major National Dialogue will contribute towards restoring lasting peace and calm.

I would like to take this opportunity to recall the crucial role of our defence and security forces. They are required not only to protect the Nation from any external aggression, but also to counter any threat against our national unity.

They have been carrying out this dual task with admirable courage and efficiency and, it must be said, making huge sacrifices. That is why, today, I wish to reassure them of the support of our entire Nation and my personal esteem.

Turning now to the cadet officers of the “Major General Kodji Jacob" batch, whose graduation we celebrate this day, I urge you to draw inspiration from the example set by this brilliant senior officer after whom your batch has been christened.

Major General Kodji Jacob fell in the line of duty on 22 January 2017, when his helicopter crashed as he was returning from a reconnaissance mission in the Far North, in the context of the fight against the Boko Haram terrorist sect. He was then the "Emergence 4" Operation Commander.

Throughout his career, he distinguished himself through his bravery, intelligence and closeness to his troops.

For three years, you underwent gruelling training at the Combined Military Services Academy. As you are now equipped with the basic requisite knowledge for discharging the duties that you will be assigned, and trained on republican values, you must adapt to our country’s overall context.

This context is characterized by the existence of new forms of threat. You may have to face so-called asymmetric conflicts. You may also have to combat cybercrime which can, at the same time, undermine national security and destabilize the national economy.

You are now members of a republican Army. Accordingly, in performing your duties, you must respect human rights and be defenders of the well-being of your compatriots.

I also urge you to always work in synergy with them and to provide them assistance whenever necessary. Such is one of the conditions for the success of your missions.

Similarly, I recommend that you establish close collaboration with local authorities. Also make sure you remain close to your subordinates, of course, with due observance of discipline which is the strength of the armed forces.

At this juncture, I wish to congratulate the senior civil and military staff, at various levels of the chain of command, for their hard work and dedication during your training.

I also hail the success of your fellow cadet officers from brotherly countries, namely the Central African Republic, the Republic of Congo, the Republic of Côte d'Ivoire, the Gabonese Republic and the Republic of Guinea. Their presence in your midst bears eloquent testimony to the recognition your Academy enjoys, the vitality of sub-regional and regional cooperation, as well as the excellent ties existing between Cameroon and their respective countries.

Lastly, I wish to congratulate you for choosing the arms profession. It is one that demands extraordinary skills. It is also and above all a special calling as it entails the eventuality of the supreme sacrifice. This is what one 19th century poet referred to as "military servitude and grandeur".

As you prepare to return to your various units, I recommend that you follow in the footsteps of your predecessors, whose services have remained in keeping with the motto of our Army, "Honour and Fidelity".