First Lady Madam Chantal BIYA presided over a fashion show, K-Walk, on Saturday 7 November 2015 at the Yaoundé Hilton Hotel where she was joined by the wives of the President of the Senate and the National Assembly. 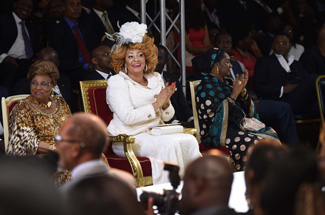 The wife of the Head of State was received on arrival at the ceremony by the Director of the Civil Cabinet Martin BELINGA EBOUTOU and the Minister of Arts and Culture Narcisse MOUELLE KOMBI. The fashion parade “K-WALK 2015” a veritable show of elegance, was with a lot of splendour, light and flowers that was made even more dignifying by the presence of Madam Chantal BIYA. Also present were members of Government, the Diplomatic corps, CERAC and lovers of fashion.

The parade was in three stages. The South African designer David THALE started the show with an astute mixture of African and modern dress designs. 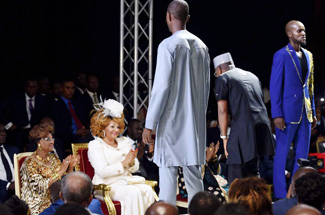 The Ivorian Ciss Sainte Moïse then followed. His models seduced the public with their highly contemporary dresses, sumptuous gowns and suits with African embroidery.

The third round was made up of the Kreyan collection put up by Anna NGANN YONN. The Cameroonian demonstrated her know how and skills in the sowing of gowns, long skirts and costumes made with skin, wax, feathers, mousseline, etc.

Each round was occasion for Madam Chantal BIYA to look on with admiration, and the public generally responded with applause. There was general satisfaction at the end of the parade that lasted over one hour.

The day ended with several of the models having photo opportunities with the wife of the Head of State.