The outgoing Head of the International Committee of the Red Cross in Cameroon, Simon Brooks was received in audience at the Unity Palace on 4 July 2017. He met with the Director of the Civil Cabinet at the Presidency of the Republic, Minister Martin Belinga Eboutou, on behalf of the Head of State. 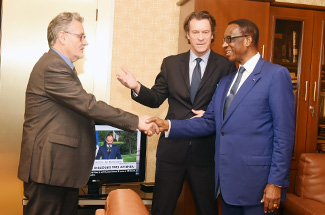 Speaking to reporters after the audience, the ICRC leader said it was an opportunity for him to thank President Paul BIYA, the Government, and Cameroonians for their legendary hospitality towards refugees. He equally acknowledged Government’s openness that facilitated ICRC missions throughout his stay in Cameroon.