After attending the very successful 15th Summit of the Francophonie in Dakar Senegal, the Head of State His Excellency Paul BIYA and his wife Mrs. Chantal BIYA returned to Yaounde on Monday 1 December 2014. The Presidential Couple was welcomed at the Nsimalen International airport by a host of senior personalities including the President of the Senate Marcel NIAT NJIFENJI; the Speaker of the National Assembly CAVAYE YEGUIE DJIBRIL; the Prime Minister Head of Government Philemon YANG; the Secretary General of the Presidency of the Republic Ferdinand NGOH NGOH; several Ministers and Administrative Officials. 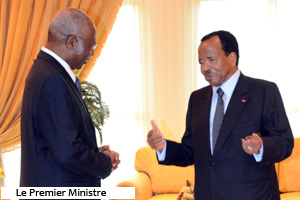 President Paul BIYA had a joint audience with the President of the Senate and the Speaker of the National Assembly, and then received the Secretary General of the Presidency of the Republic and the Prime Minister. While the audiences were in process, the First Lady Madam Chantal BIYA shared good moments with the wives of close collaborators of the Head of State.

The Presidential motorcade then passed through the usual major streets of Yaounde to take the Presidential Couple to Unity Palace. Thus came to close the brilliant participation of the Head of State and his wife of the Francophonie Summit in Dakar.