New Ambassadors from Algeria, Tunisia, Japan and Spain presented their letters of accreditation today Wednesday 11 November 2015 to the Head of State His Excellency Paul BIYA, during four solemn diplomatic ceremonies at Unity Palace. 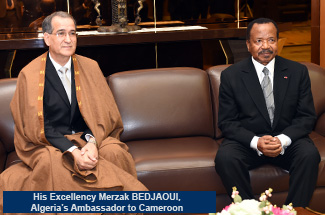 His Excellency Merzak BEDJAOUI, Algeria’s new Ambassador to Cameroon arrived Unity Palace shortly before 11 am, and was led by the Chief of State Protocol to review troops of the Presidential Guard who were on hand for the occasion. The military honours included the singing of the Cameroon National Anthem with the Cameroon flag in position. The diplomat was then led up to the third floor of the main building and introduced to the President of the Republic. He then handed over his letters of credence to President Paul BIYA. He also met with the close collaborators of the Head of State including the Minister of External Relations, Lejeune MBELLA MBELLA; the Secretary General of the Presidency of the Republic, Ferdinand NGOH NGOH; the Director of the Civil Cabinet, Martin BELINGA EBOUTOU; the Commander of the President’s Special Commmand, General Emmanuel AMOUGOU and the Commander of the Presidential Guard, Lieutenant Colonel Raymond Charles BEKO’O ABONDO. 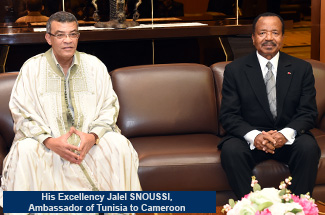 After a brief discussion with President Paul BIYA, the Algeria Ambassador once more had military honours in the courtyard of Unity Palace, this time with the execution of the Algerian anthem.

The elaborate diplomatic ceremonies confer full powers on the new Ambassadors to carry out their missions in Cameroon. The ceremonies are also a testimony of the very friendly cooperation ties between Cameroon and Algeria, Tunisia, Japan and Spain.