The Head of State His Excellency Paul BIYA received letters of accreditation on Thursday 12 November 2015 from the Ambassadors of Germany, Senegal and Turkey, in a continuation of diplomatic ceremonies that started the day before at Unity Palace. 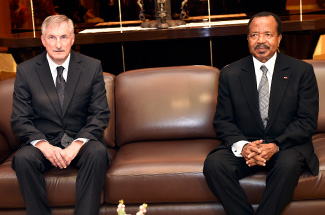 Germany and Cameroon have strong cooperation ties that have lasted over 40 years. Since independence, Germany has always supported the development efforts of Cameroon with contributions that estimated at more than 906 million Euros, which is 595 billion Francs CFA. Cameroon is one of the 50 countries in the world around which German development cooperation is centred. 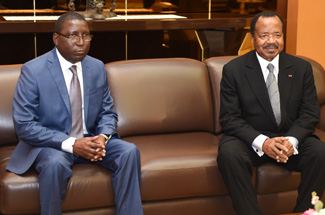 The next diplomat to hand in letters of accreditation was H.E. Vincent BADJI, Senegalese Ambassador to Cameroon. Senegal enjoys close friendly cooperation ties with Cameroon as there is mutual respect and trust on both sides. Though their embassy in Cameroon was closed in 1994, it was re-opened in July 2007 and has been fully functional since then. 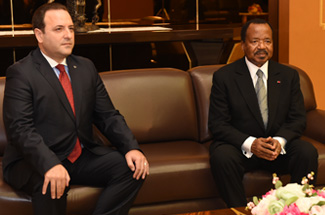 Diplomatic relations between the two countries have been strong since the exchange of high level visits. It should be recalled that President Abdullah GÜL paid an official visit to Cameroon in 2010. On his part, President Paul BIYA went on a State visit to Turkey from 25 to 28 March 2013. During these visits, Cameroon and Turkey signed several cooperation agreements in the domains of the economy, defence, communication and diplomacy.