The President of the Republic, His Excellency Paul BIYA on Thursday 5 July 2018, received three letters of credence at the Hall of Ambassadors in the Unity Palace. The credentials ceremony marked the beginning of their diplomatic missions in Yaounde. 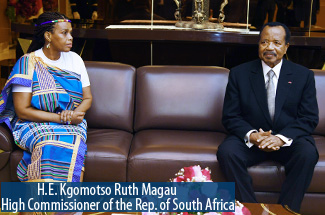 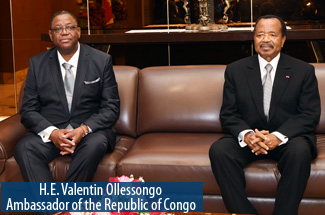 President Paul BIYA was assisted throughout the ceremonies by his close collaborators: Lejeune MBELLA MBELLA, the Minister of External Relations; Ferdinand NGOH NGOH, the Secretary General at the Presidency of the Republic; Samuel MVONDO AYOLO, the Director of the Civil Cabinet; Air Force General Emmanuel AMOUGOU, Chief of Staff of the Special Command; and Lieutenant Colonel Raymond Jean Charles BEKO’O ABONDO, Commander of the Presidential Guard.

It should be noted that H.E. KGOMOTSO Ruth MAGAU has been a Member of Parliament under the banner of the ANC party. She formerly served as South Africa’s Ambassador to the Republic of Vietnam. 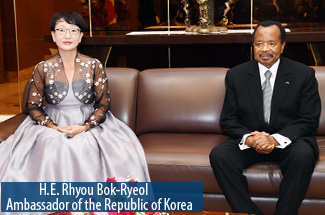 Prior to his designation to Cameroon, H.E. Valentin OLLESSONGO was Ambassador Extraordinary and Plenipotentiary to the Kingdom of Morocco. He held the same position in Senegal, Mali, the Gambia, Cape Verde, Mauritania, and Guinea Bissau.

On her part, H.E. RHYOU BOK-RYEOL occupied the position of Minister Counsellor at the South Korean Embassy in the People’s Democratic Republic of Algeria.