The President of the Republic, His Excellency Paul BIYA has received Letters of Credence from the Apostolic Nuncio to Cameroon and Equatorial Guinea, and the Ambassadors of the Republic of the Sudan and the People’s Republic of China. This was during a colourful presentation of credentials ceremony at the Unity Palace on 6 July 2018. 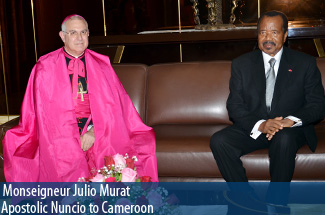 Monseigneur Julio MURAT – representative of the Holy See, has served as Apostolic Nuncio in Zambia and Malawi. On his part, Ambassador ELZEIN IBRAHIM HUSSEIN HASSAN formerly served as Head of the African Union Department in the Sudanese Ministry of Foreign Affairs. Meanwhile, H.E. WANG YINGWU is a seasoned Diplomat who previously held the position of Director of Academic Affairs at the Chinese Ministry of Foreign Affairs. 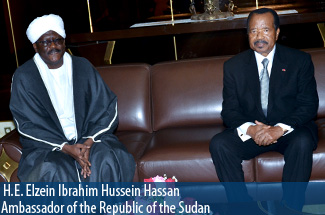 Five close collaborators of the Head of State took part in the ceremonies. These include: Lejeune MBELLA MBELLA, the Minister of External Relations; Ferdinand NGOH NGOH, the Secretary General at the Presidency of the Republic; Samuel MVONDO AYOLO, the Director of the Civil Cabinet; Air Force General Emmanuel AMOUGOU, Chief of Staff of the Special Command; and Lieutenant Colonel Raymond Jean Charles BEKO’O ABONDO, Commander of the Presidential Guard.