The winners of the 2015 Cup of Cameroon UMS Loum received the trophy from the hands of the Head of State His Excellency Paul BIYA, who personally presided over the finals that also marked the end of the 2015 sports season. At the end of the thrilling encounter that pitted the Loum team against Panthere of Bagangte, UMS won the match by 2 goals to zero, giving the team that was playing their first final in the cup of Cameroon victory over the team from Nde Division. 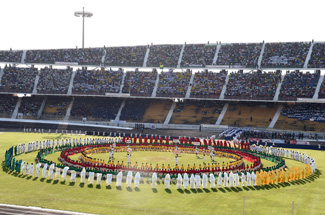 Between the arrival of the Head of State at the stadium at 3.30pm and the kick-off 30 minutes later by the Minister of Sports and Physical Education Ismail BIDOUNG MKPATT, several cultural displays were made to call for unity in purpose and unflinching support for the defence and security forces fighting against terrorism.

The final of the cup of Cameroon was a memorable moment of communion between the Head of State and the sports movement in particular and with the youths of Cameroon as a whole.