General Electric to Invest in Cameroon’s Energy and Transport Sectors

A high-level delegation of the General Electric (GE) Company has been received in audience by the President of the Republic, His Excellency Paul BIYA. 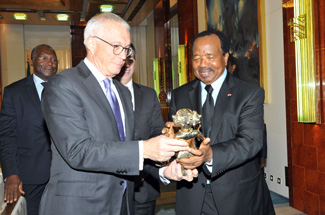 The Head of State met the group, which was led by Mr. Jay Ireland, President and CEO of GE Africa, at the Unity Palace on Friday 30 June 2017.

The American multinational conglomerate corporation is prepared to invest in Cameroon’s energy and transport sectors.

Mr. Jay Ireland told reporters that GE is willing to accompany President Paul BIYA’s socio-economic vision with projects that are related to the production and transmission of power (hydro and gas). 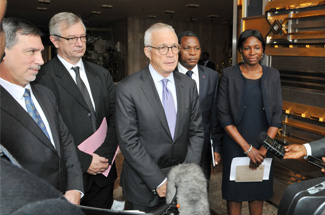 GE Africa’s boss also announced that the company is prepared to develop the railway and aviation industries in Cameroon.  He gave a two-year time limit for the actualisation of certain operations.

The delegation was accompanied by the U.S. Ambassador to Cameroon, H.E. Michael Stephen Hoza.