The Head of State His Excellency Paul BIYA granted audience to CHEIKH TALIBY SYLLA, Guinean Minister of Energy and Hydrology and special envoy of President Alpha Conde, on Friday 26 October 2018 at Unity Palace. He came along with a message of congratulations from Alpha Conde to President Paul BIYA following his brilliant re-election during the 7 October presidential election. 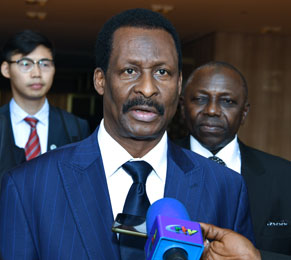 Speaking to the press shortly afterwards, the Guinean envoy disclosed that he discussed several issues of common interest to the two countries with the Head of State. He was particularly happy of the opportunity of meeting President Paul BIYA, a great man with a high vision for the development of his country Cameroon and Africa in general.

The Guinean Minister also pointed out that the two leaders have convergent views on the judicious exploitation of the energy and mineral resources of their countries for the benefit of their population.