The President of the Republic, His Excellency Paul BIYA – current chair of the Conference of Heads of State of the Economic and Monetary Community of Central Africa (CEMAC) granted two successive audiences to special envoys from the Republic of Equatorial Guinea and the Republic of Chad on 18 February 2021.

H.E. Baltasar Engonga Edjo’o, Equatorial Guinea’s Minister of State for Regional Integration – bearer of a sealed message from President Teodoro Obiang Nguema Mbasogo – was the first personality to meet the Head of State.

This was followed by a 25-minute audience with Chad’s Minister of Infrastructure and Transport, Mr Ahmat Abakar Adjid. He equally delivered a fraternal message from Marshal Idriss Déby Itno.

Both emissaries spoke to reporters after meeting President Paul BIYA.

On his part, Minister Ahmat Abakar Adjid lauded the cordial ties that exist between Yaounde and N’Djamena. He said both peoples have a common goal to fight against poverty and terrorism. 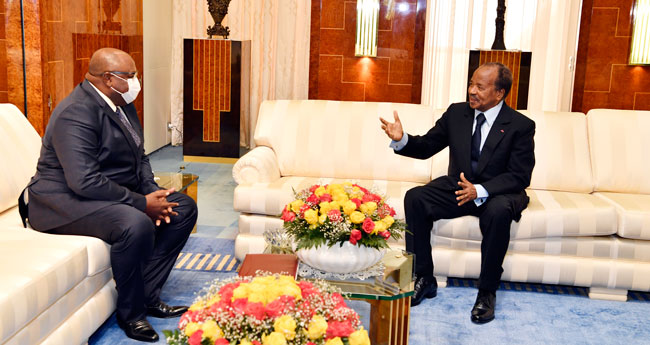